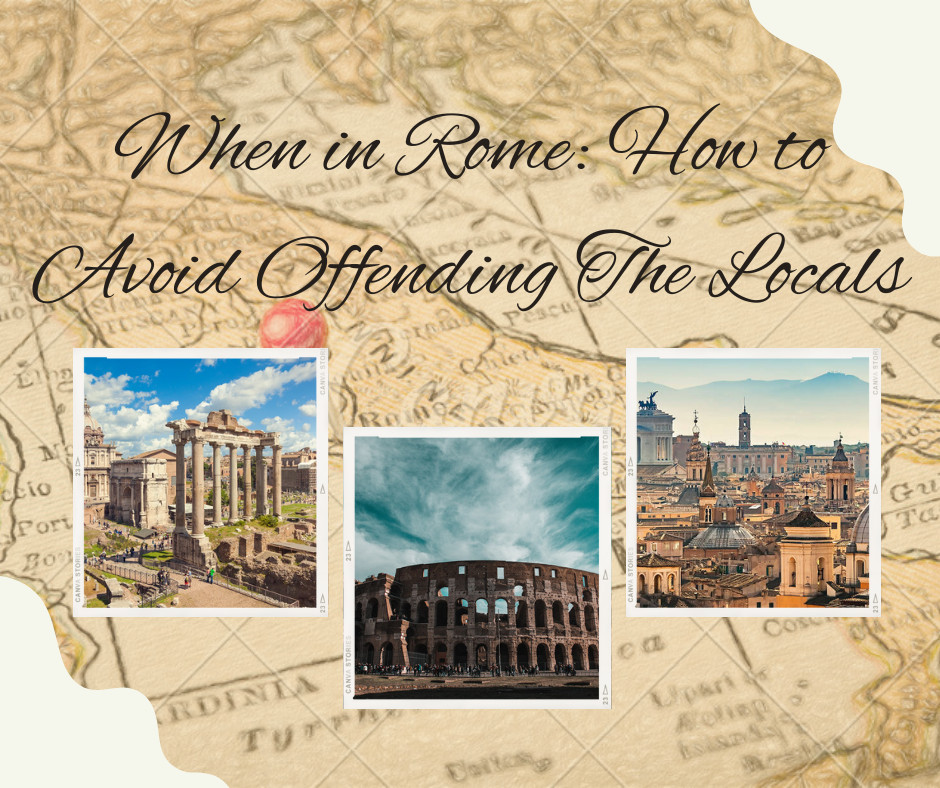 When in Rome, do as the Romans do. This famous saying may originate from St. Ambrose, but it’s just as applicable today as it was back then. If you want to fit in and not stick out like a sore thumb, it’s important to be aware of local customs and etiquette.

Don’t Be a Loud Tourist

Visitors of Rome should be aware that Italians value their personal space and generally speaking, they don’t like it when people talk loudly in public places. If you need to raise your voice, try to do so discreetly. Otherwise, you risk disrupting the tranquility of Rome and earning the ire of its residents. By respecting the local customs, you can ensure that your visit to Rome is enjoyable for both yourself and those around you.

As is the case in most European cities, it’s important to dress modestly when out and about in Rome. This means avoiding anything that may be considered too revealing or provocative. Tank tops, short shorts, and ripped clothing should all be avoided. When in doubt, go for a more conservative look.

When in Rome, it’s important to be patient. Italians generally move at a slower pace than Americans, so don’t expect things to happen as quickly as they might back home. This is especially true when waiting in line or trying to hail a cab. Just relax and go with the flow – eventually, you’ll get where you need to go.

Be Aware of Your Body Language

In Italy, it’s considered rude to gesture excessively when you speak. This is because Italians use a lot of hand gestures when they communicate and excessive gesturing can be seen as disruptive. It’s also important to avoid pointing with your index finger as this is considered very impolite. If you need to gesture, try doing so with an open hand instead.

Be Cautious of Your Words

When in Rome, it’s best to avoid discussing sensitive topics such as religion or politics. This is because Italians are very passionate about these subjects and it’s easy to inadvertently offend someone if you’re not familiar with the local culture. It’s also important to be careful about using profanity as this can be considered very rude. If you must swear, do so discreetly.

In general, it’s a good idea to be mindful of your words and actions when traveling to any new country. By doing so, you can avoid offending the locals and ensure that your trip is enjoyable for everyone involved.

Italians are known for their passionate personalities and their love of good food and wine. But what many people don’t realize is that they also value their personal space. So, if you find yourself in Rome, be sure to give people some room. Italians generally don’t like it when people get too close, so avoid invading their personal space. This doesn’t mean that you can’t be friendly – just be aware of how close you’re standing to people and give them the opportunity to move away if they need to. By respecting the personal space of others, you’ll ensure that everyone can enjoy the beauty of Rome without feeling crowded or uncomfortable.

When it comes to littering, this means making sure you dispose of your trash properly. It might not seem like a big deal, but throwing your garbage on the ground is considered very rude in Italy. Not only does it create an eyesore, but it can also be harmful to the environment.

Be Mindful of Your PDA

Public displays of affection are generally frowned upon in the city, so if you must show affection for your partner, do so discreetly. This doesn’t mean you can’t enjoy a romantic moment or two during your stay – just be aware of your surroundings and keep things relatively low-key. A stolen kiss in a quiet alleyway or holding hands while walking through the park are perfectly acceptable ways to express your love. Just remember to respect the city’s cultural norms and you’ll be sure to have a wonderful time.

Lastly, it’s important to be respectful of the local religion and culture. Rome is home to some of the world’s most famous religious sites, so it’s only natural that people would be passionate about their faith. As a visitor, it’s important to be respectful of these beliefs and avoid offending religious sensibilities. The same goes for the local culture – be sure to research customs and etiquette before your trip so that you can avoid any potential faux pas.

By following these simple tips, you can ensure that you have a pleasant and enjoyable experience when visiting Rome.